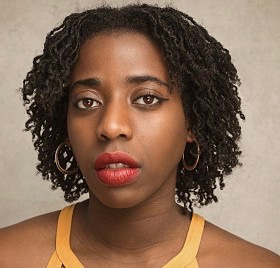 I am an Angolan, Portuguese born writer performer living in East London. I enjoy creating work that derives from my personal experiences ranging from a direct point of view to an ancestral one.

The first short film I wrote and starred in was called 'Empty Hands'. It was showcased in two film festivals in 2017 Barbican DIY festival and Lyric Filmfest, the film talks about children on the spectrum, how they are never listened to but always spoken for. My first play 'Firecracker' was shown at Ovalhouse in 2018 it was a story inspired by Angola's Queen Njinga and Brazil's Councilwoman Marielle Franco, looking at the relationship between both women and both countries through the art of capoeira.

I am currently working on a piece called 4C Chronicles on YouTube, a comedy mockumetary. Where I personify my natural hair journey by portraying 6 different 4C hair women with different hair styles. They meet in a support group where they discuss past traumas, joy, the good, the bad, the ugly and the myths.