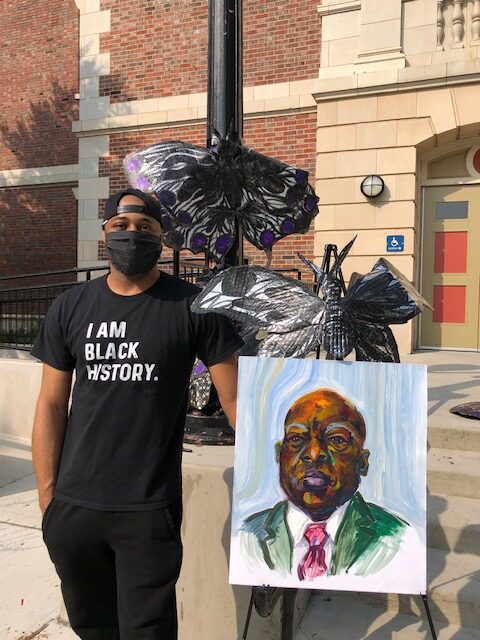 Jerrell L. Henderson is a Theatre Director, Puppeteer, and Professor of Performance Studies. Puppet Short Films include Hamlin: La Revue Sombre with Handmade Puppet Dreams (behind the scenes link provided on website) and Diamond's Dream with Chicago Children's Theatre (link/NYT's Review on website). Upcoming puppet films include a short film version of his signature puppetry piece I Am The Bear detailing his experience with police profiling with Chicago International Puppet Festival (link coming soon). He performed I Am The Bear live this fall with Chicago International Puppet Festival's Living Room Tours. His Juneteenth Puppet Protest: The Welcome Table was featured in the New York Times (June 2020) and his Fall 2020 puppetry celebration of the lives of John Lewis and C.T. Vivian titled Black Butterfly was later expanded into an educational performance piece with Tria Smith of Guild Row and a student collective working with Urban Growers Collective on Chicago’s South Side. His shadow play, 3 American Myths: A Riff in Shadow & Light in 3 Rhythmic Movements was a finalist for a 2019 Jim Henson Foundation Grant. Most recent directing credits include Mlima's Tale with Griffin Theatre (Jeff Award Nomination for Direction and Best Play) and Thurgood with Walnut Street Theatre. Other credits include The River with BoHo Theatre, Untitled with Inis Nua (Barrymore Award nomination for Outstanding Direction of a Play) and Something Like A War: A New Musical with 11th Hour Theatre (new script penned by Jerrell to be developed in May/June 2021). As an assistant director, Jerrell has worked with The Goodman Theatre, Steppenwolf Theatre, and Lookingglass Theatre. He received an MFA in Directing from Northwestern University, is a member of the Lincoln Center Directors Lab (2012), an Artistic Associate of Black Lives, Black Words, and a Henson Foundation sponsored participant at the Eugene O'Neill Theater Center National Puppetry Conference (2020).